Within the past years a new personal issue grows within me. I have fear sometimes to go on the street because of the things that can happen, I am terribly afraid of skin heads and hate crimes – many of my friends and closest people are from different religions than Catholicism, different skin color and various genders.

In my job during the past year I got familiar with so many massacres, genocides, modern day slaveries and all performed under the nose of the everyday regular clerk in the Modern world, in Europe. Schell company and its gas flaring in Nigeria causes major harm not only to the land but also to the local community where people are being poisoned for decades. Palm Oil destroys thousands of acres of natural plants and trees, mainly in Indonesia and Malaysia, for planting palms – affecting irreversibly the flora and fauna. I am not even going to talk about Nestle and Monsanto – we almost don’t know everyday food without the touch of one of them. I am not even going to discuss what amount of deaths, destroyed health and lives and slavery are still involved in the production of coffee, cotton, sugar, electronic devices, Christmas gifts and other things all around – things we don’t think about, don’t reflect on, take for granted. Because it is on the other part of the world, far away, we cannot see it, smell it, feel it, so we neglect it. And what about Latin America which is still in the grip of corruption and narco bosses, Ghana, Liberia, Sierra Leone, Kenya where people are still afraid to go on the streets because of the civil wars – consequence of the western (de)colonization?

I do see everything connected not in a conspiracy theory but in the direction that we as a human kind are moving into.

The dead of 150 people is something that indeed happens everyday. I see it, I realize it. Here is why I think the Paris attacks matter so much:

What I think should be done/ how should we, as a community react:

I am terrified from what happened yesterday in Paris which is closer to me now than my own city of origin. I don’t care more because it is closer, I am more afraid because it is closer. But I won’t allow to this fear to dictate my movement – the same way I continue walking in dark central Sofia streets on the way to the pub with my dark-skinned and queer friends. Stay brave, consume local, approach to each person as he is unique, fight evil with more art, color Facebook profile photo with the French flag, share #notinmyname – these are things that we can all do. 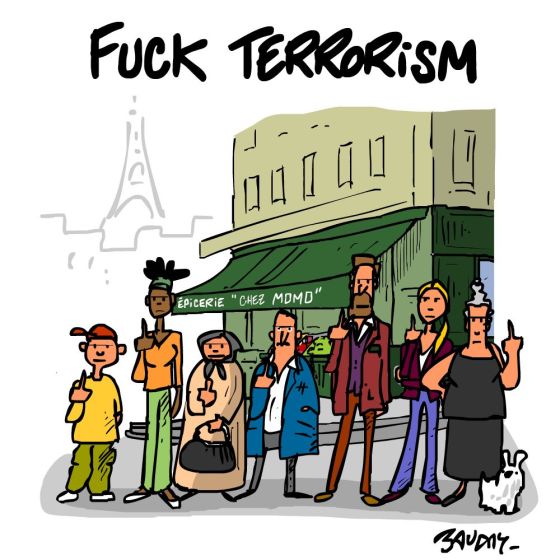